We passed by Skyline Trail yesterday on the way to Pleasant Bay because we knew there wouldn’t be enough time to get through even the short trail before dark, so that was #1 on the list for today. I’d previously been on this trail in 2006 with some friends, and knew it was a “must see” again. 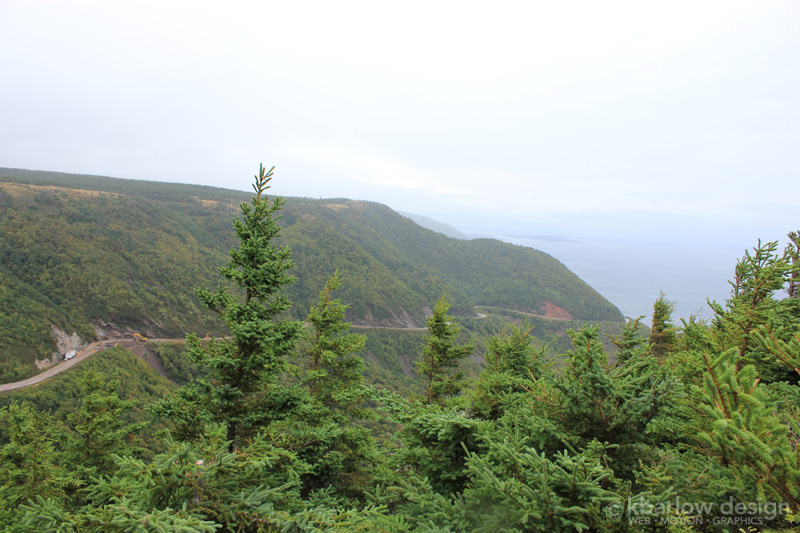 The construction was really freaky to drive by, I was thankful we were on the inside! You can see the dozer perched on the edge of the road, it’s harder to see the steepness of the drop off from this angle, from the road, it’s absolutely frightening!! 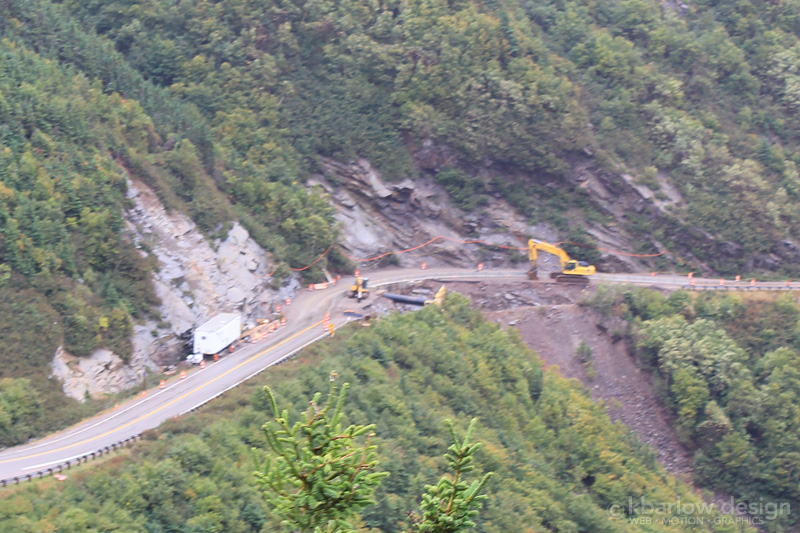 Beautiful, right? What doesn’t show are the 200km/hour winds! I literally CRAWLED across the boardwalk because I was going to be blown over. It was the most intense wind I’d ever experienced. We decided it wasn’t safe to go any further and turned back to the forest. There were 3 more platforms below, but with no fencing and cliffs on either side, there would be nothing to slow me down if I got knocked over! 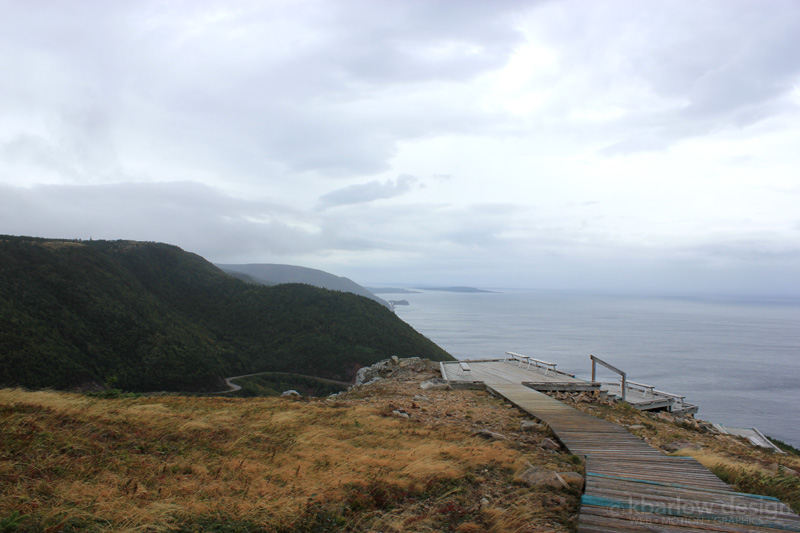 Back in the forest, we could take the same path back, or the long trail. I’d heard this trail was pretty rough, and it had been raining for a few days, so I was unconvinced that we should go that way, but my other half wanted to give it a shot, so off we went. Within a few minutes, we saw an ENORMOUS bull moose! 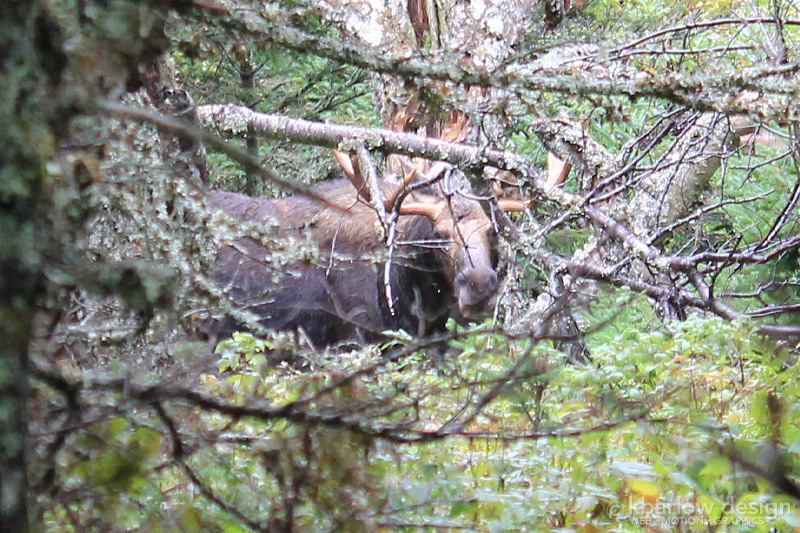 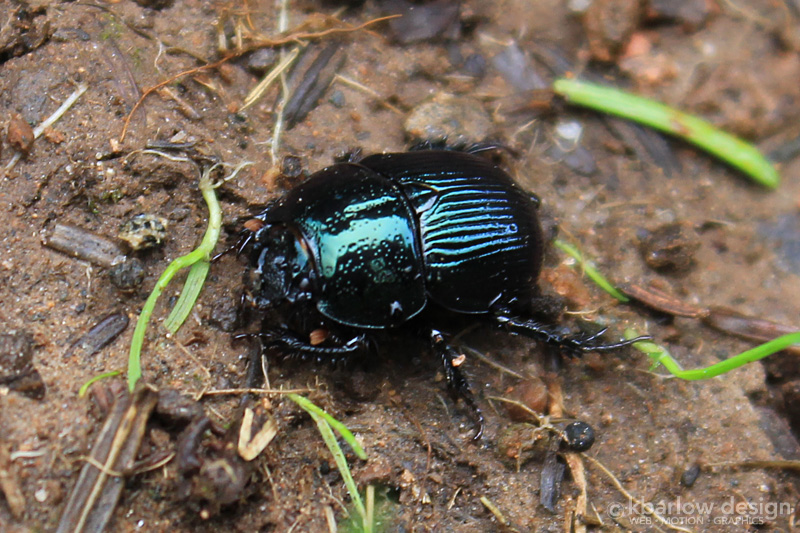 The rest of the hour and a half long hike ended up being uphill in the mud. We both bought rubber boots but for whatever reason wore our running shoes for the hike. The trails provided a great path for aaaaaalllllllll that rain water to flow easily, and we were both soaked from the knee down and covered in mud by the end of it. Our shoes took 2 days to dry… 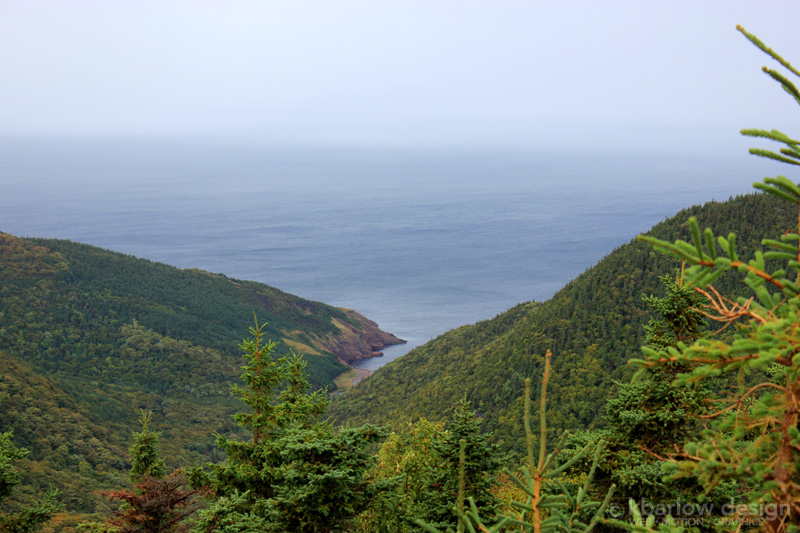 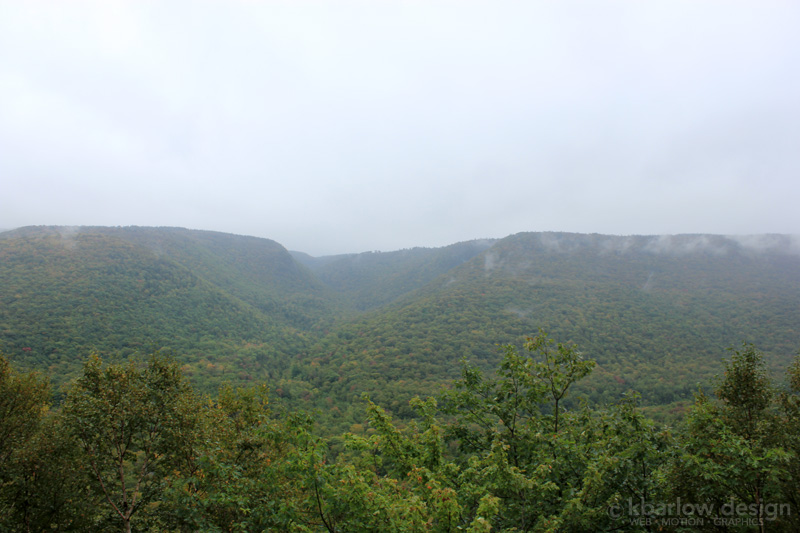 From Skyline, we drove up to Meat Cove, the most Northern tip of Cape Breton. A friend of mine had recommended it highly, but it had been raining for a few days now, and we didn’t realize that most of the roads would be washed away. It was one of the most stressful drives we did, but we made it up there. It was stunning, but if I’d known that the roads would be that bad, I would have said “next time”. The rocks were so neat, huge big slaps, crumbling and jutting out from the land. It was (surprise!) raining, so we didn’t spend that much time out of the car, and started back on our journey South along the other side of Cape Breton. 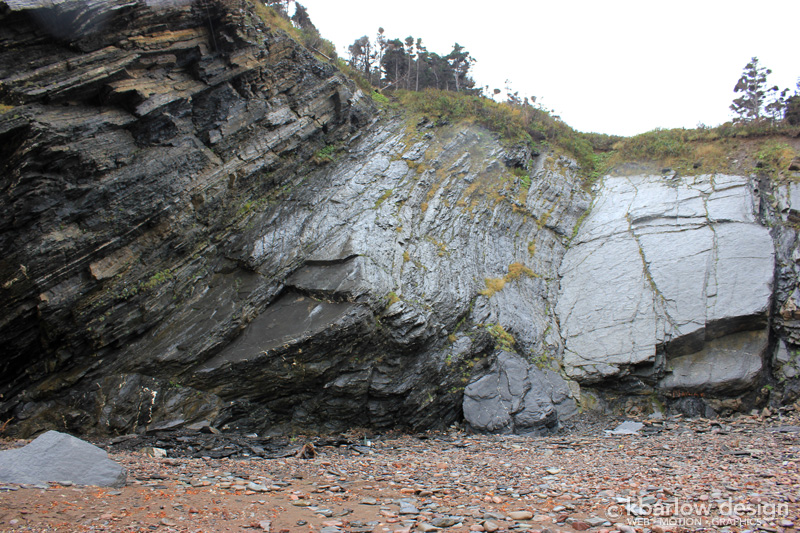 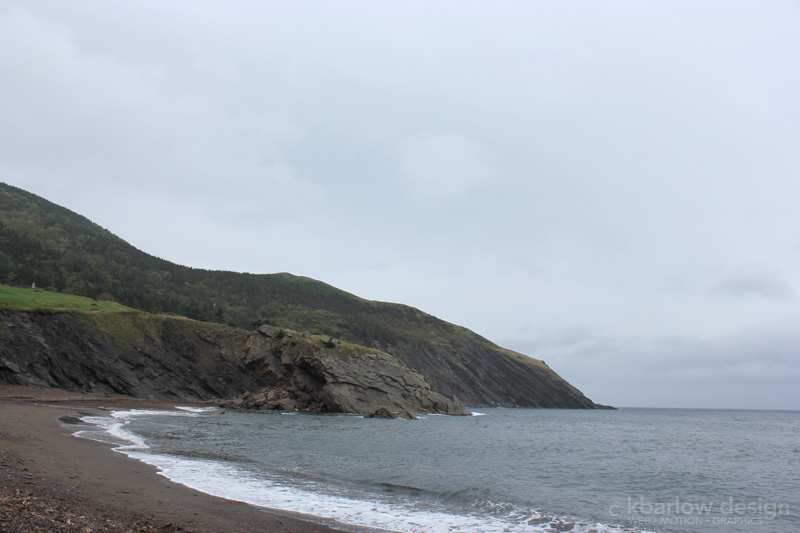 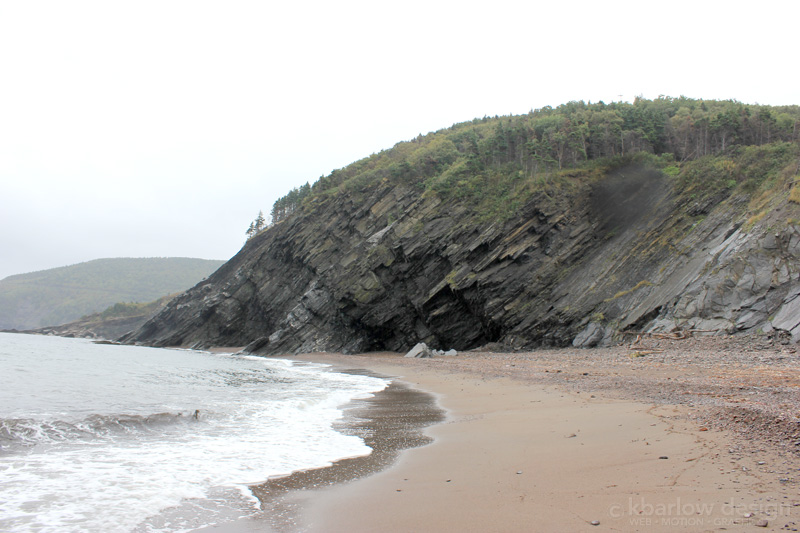 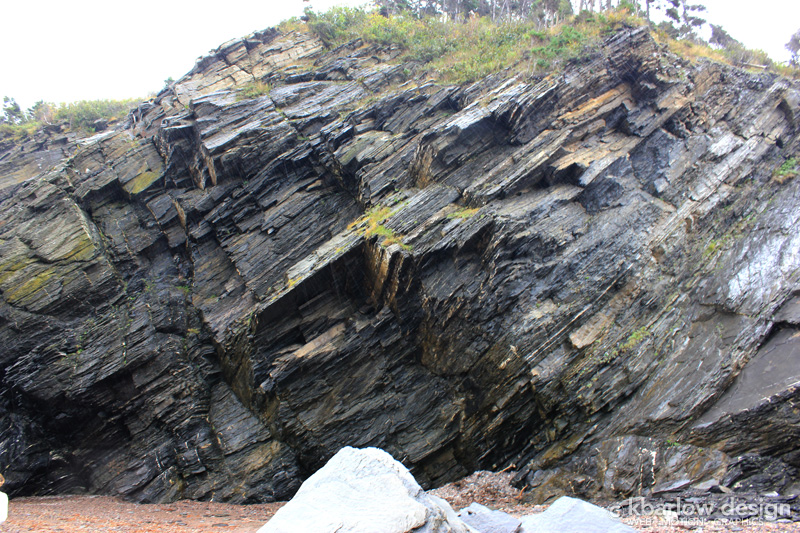 En route we stopped at Black Brook Falls, which… were kind of gross looking, and didn’t smell wonderful, but we checked it off on the “waterfall” list. 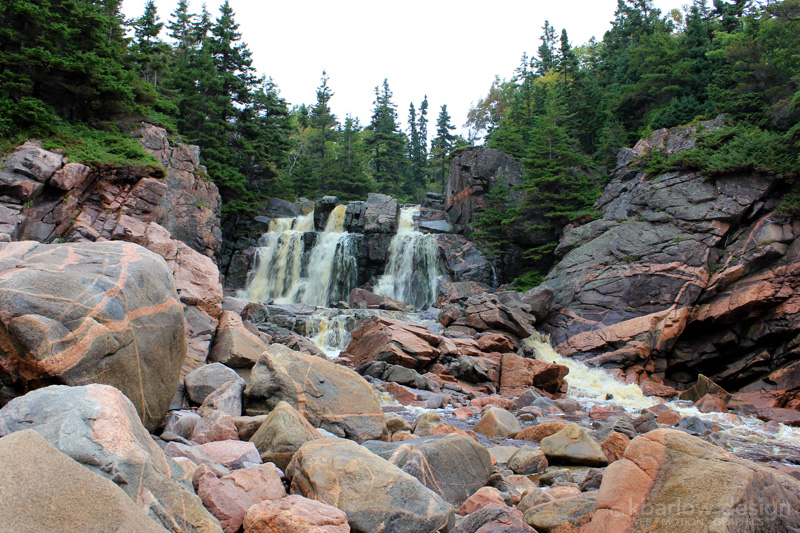 We were on a beach, so we went looking for critters under rocks (of course! who doesn’t?!) 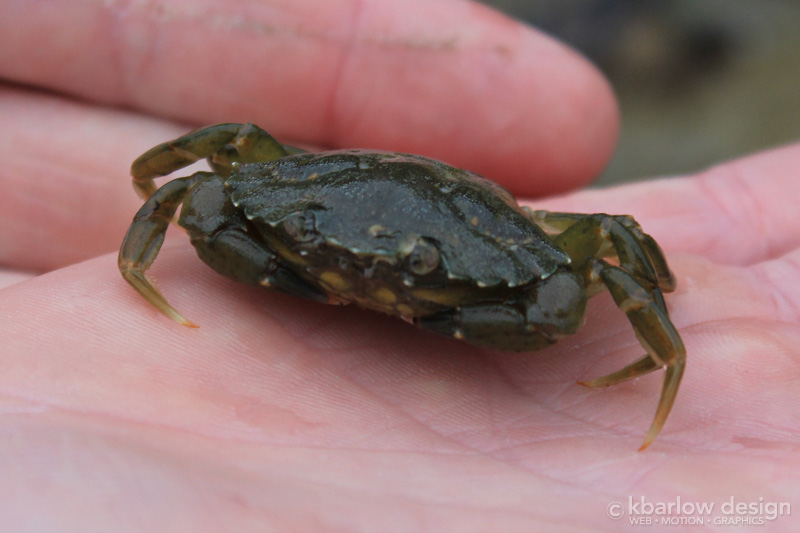 We arrived in Ingonish, and located the biggest beach we could to start poking around. 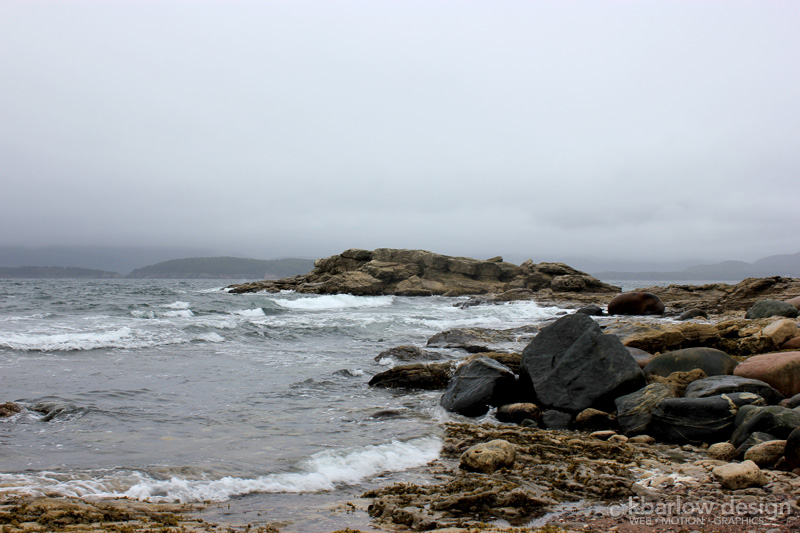 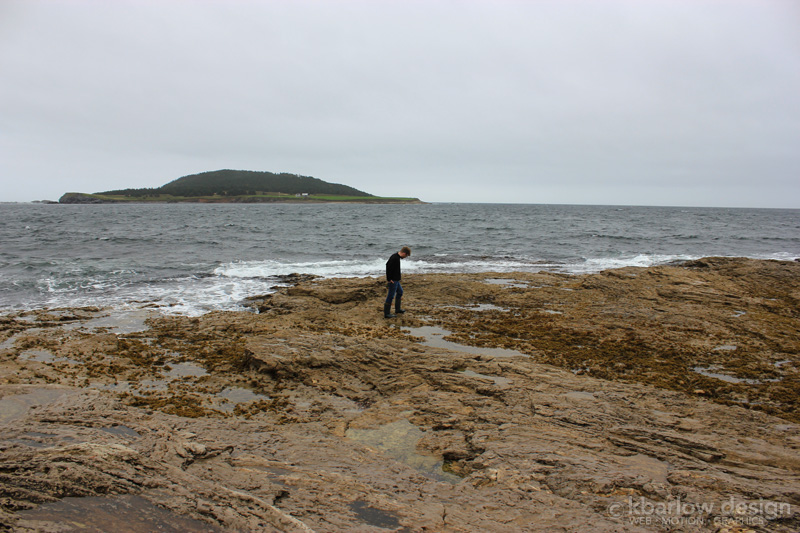 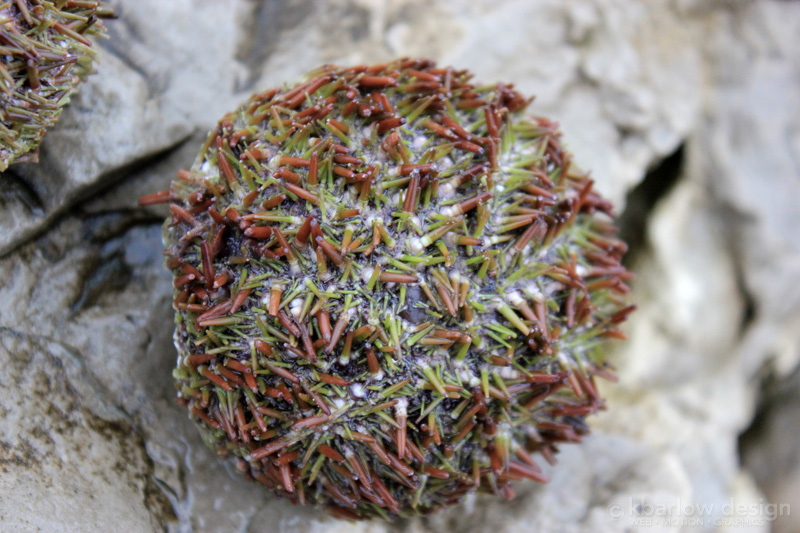 (boots – since our shoes were soaked, and it just made sense! We learned our lesson!) 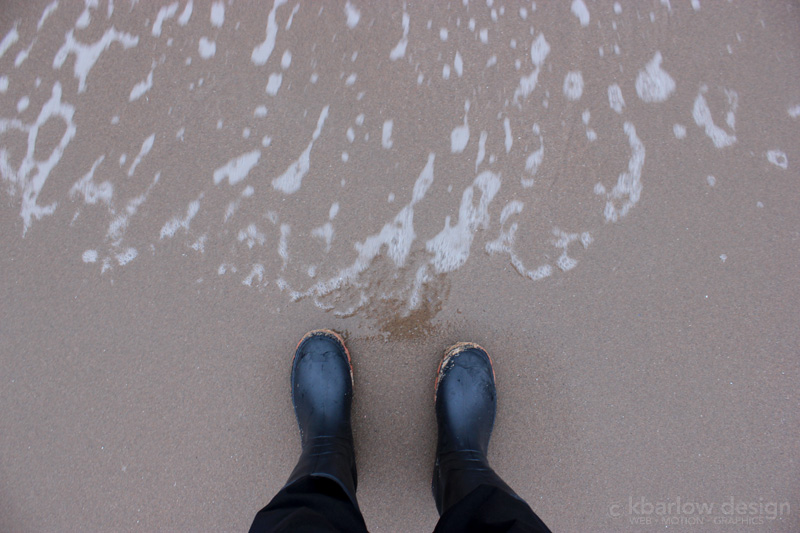 We met a lovely woman on the beach and ended up chatting with her for an hour. She was walking her dog, and told us all about the area, her family, and all sorts of things. It was getting dark and we had planned on sleeping in Baddeck so we said our goodbyes. She said that next time we’re in town, we should come over for a cup of tea. She made sure we knew which cottage was hers – it was so sweet! She also told us the best route to take to Baddeck (including yet another Ferry!) 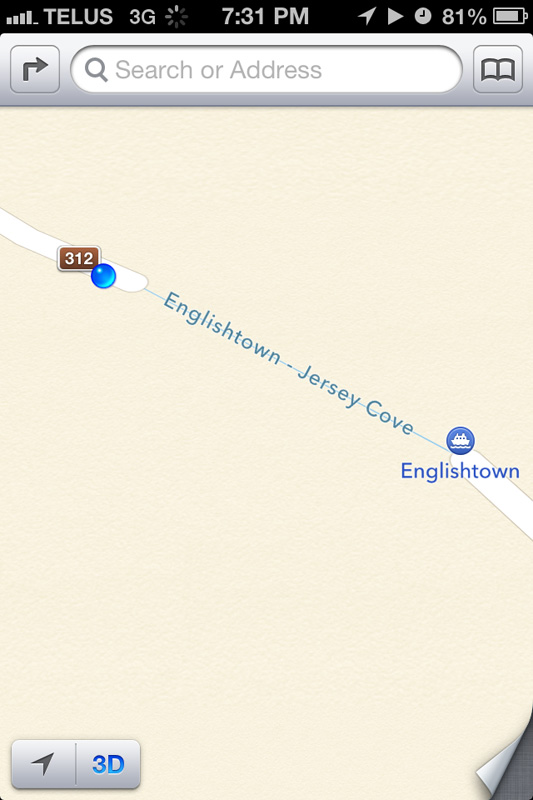 We arrived in Baddeck, made a few calls and found a nice motel for the night. The restaurant seemed fancy, we’d been living off Tim Horton’s for a while now and the cloth napkins were intimidating. My other half was stuck wearing his big green rubber boots since that’s all that was dry, but I pointed out the gentleman at the next table was wearing socks and flip flops. Yup, both. 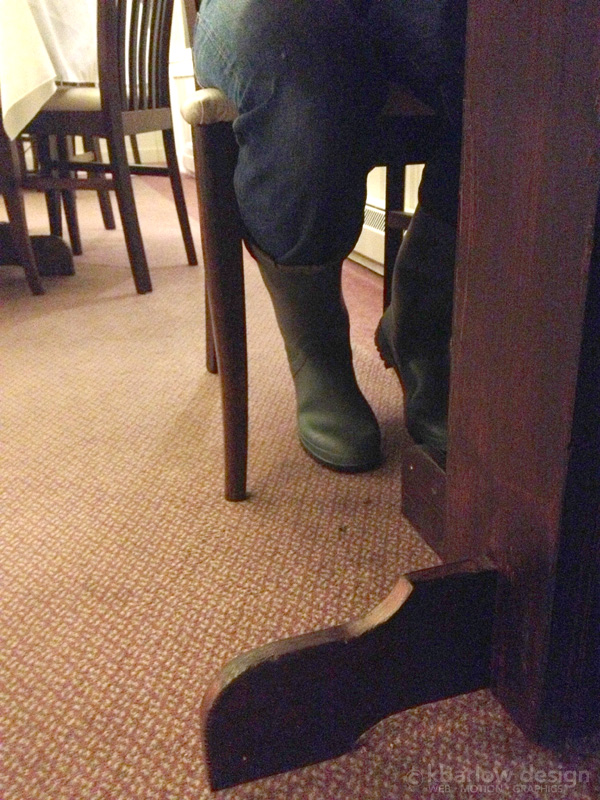