Aphasia is a communication disorder that affects a person’s ability to process and use language.

It affects people differently, from moderately to severely, and can affect being able to understand what people are saying, being able to express what they want to say, or both. It’s an acquired language disorder, usually due to stroke, brain injury, or brain illness. It can affect a person’s ability to speak, understand, read, and/or write.

If you see someone struggling to communicate, offer different methods that might suit them better – a pen and paper, use questions that have one clear answer, speak clearly without rushing, use gestures, and be patient. They’re the same as anyone else – they want to connect and chat, it just might take them a bit longer, or in a way that you’re not used to.

The most important thing to know about people with aphasia – it is a loss of language, not intellect.

Communicating with someone with aphasia:

If you’re trying to communicate with someone who’s struggling, offer different options:

Lots of programmes exist for those with aphasia, and those that want to help by volunteering their time. You can find out what’s near you through a quick Google search, asking your doctor, or your local hospital for information.

Spread the word about aphasia, and hopefully it will help someone know what to do if they’re faced with a situation where they don’t know how to assist someone in communicating what they want/need.

Communication boards can be a great tool to help alleviate frustrations by being able to point to what you want on the board. In my experience, the communication boards we saw were hard to read, crowded with information (often there are issues with vision after a stroke as well, so lots of white space can help make differentiating between items clearer), and in general weren’t organized into themes/groups that made sense. I’ve wanted to design a set of communication boards for years, so I’m glad to finally be working on this project.

When researching available assets online, I found so many “free” ones that required email and phone numbers and follow up calls from businesses selling some service or another. When you’re in the middle of having a family member suddenly unable to communicate the way they used to (not even mentioning dealing with the TBI/stroke that caused the issue!) – all you want is to see if the resource they’re offering might work. It’s the wrong time to be trying to sell.

These free communication boards are in PDF format so they can be used digitally on a tablet, or printed on a standard piece of paper. I’ll continue to add more, and hopefully in multiple languages over time.

If you’re having trouble with your speech or think you might be having a stroke, call 911 (or your local emergency phone number) immediately to seek medical attention. 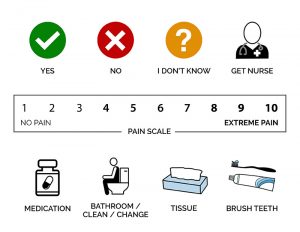 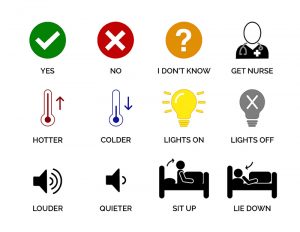 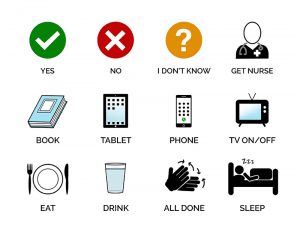 Please note these communication boards are in no way representing any sort of medical advice – please speak directly with your doctor for diagnosis and/or treatment plans. By downloading and/or using these boards you’re assuming any and all risk or perceived risk.

If you’ve had experience with aphasia, you’re a speech language pathologist/therapist, or deal with anything to do with these types of communication disorders and would like to help, please reach out! I’d be happy to get your insight and make these tools the best that they can be.

Our family has been through a lot in the past several years, and we’ve learned a lot about aphasia. The type we deal with in my family is both expressive and receptive. After suffering a hemorrhagic stroke in 2012, my Dad has trouble understanding what people are saying (receptive aphasia), although there has been a massive improvement over the years, and sometimes struggles to find the words he wants to say (expressive aphasia). I often explain it to people by comparing it to a stutter. I find that helps people to realize that he’s still the same person, with all the same memories, education, and experience, he just can’t spit words out the way he used to!

We use a lot of gestures in our family, often interrupting what we’re trying to say because we burst out laughing at some of the ways we use facial expressions, body movements and sounds to express ourselves in a way that he’ll understand the story we’re trying to tell (along with words). We laugh a lot! (And eventually we get the story across!). We’ve got some gestures that we’ve used for years that are staples that he recognizes easily, so we use them while talking as a secondary information source. Some days are better than others, and some days you’d never know there was any issue at all. He’s worked so hard to get better, and the change is incredible since his stroke left him with about 10% of his language intact initially – I’d say he’s probably closer to 90% now! We’ve learned what works best for him; for example to trigger a word he wants to say but can’t get out, he’ll start to spell it. By the second or third letter, it will often release the word from his brain to his mouth and he’ll be able to say it. His favourite form of communication is written, so we write emails back and forth all day which keeps everyone up to date on what’s new, what’s going on that day and anything else we talk about during our daily emails.